What are Marble Musings?
Our Marbles are interesting folks, and we want to share their thoughts with you. While these topics are not always related directly to our business, they are relevant to what’s going on in the world around us! Join our team as we explore what’s rolling around in our brains. 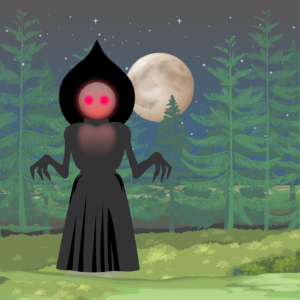 The idea started simply: write a 200 to 500 word blog, ask ChatGPT to write on the same topic, and then ask our audience to guess which blog was which. For me, the biggest challenge was choosing a topic: Do I focus on something relevant to the company? Do I explore my incredibly broad repository of random facts? How do I ensure engagement while also ensuring I’ll know whether the AI’s blog is “good” or not?

The answer came from nowhere: “good” and “bad” are subjective, and that’s something I’ve spent real, intensive time instilling in each of my freshman English students at community colleges across the United States over the past decade. I can’t determine whether my blog is better than the AI blog; I can only determine which is more factual and more intellectually stimulating. That meant I absolutely had to choose a passion topic. I have so many various passions that again, I wasn’t sure where to go. So I decided to write about the Flatwoods Monster of West Virginia, because I was curious how much ChatGPT could possibly know about this niche topic.

Blog A: The Flatwoods Monster

The United States Air Force launched a UFO inquiry after sightings of the monster of Flatwoods, West Virginia, were first reported in September of 1952. Dusk fell on the landscape of quiet Braxton County while six boys and a dog played in a schoolyard. Two of the boys, the May brothers, still talk about the incident, though they’ve stopped giving press interviews. The May brothers’ mom was there when it happened too, and all seven witnesses claim to have seen the pulsating red light that streaked across the sunset sky and crashed in the fields of a nearby farm. Everyone ran to see what the light might be, and a local newspaper reported that “seven Braxton County residents on Saturday reported seeing a 10-foot Frankenstein-like monster in the hills above Flatwoods.”

A legend was born that autumn day, and the Flatwoods Monster Museum, which welcomes visitors 360 days a year, is evidence the creature lives on. The “Green Monster,” or Flatwoods Monster, was originally described as a 10-foot-tall alien with a blood-red body and a green, glowing face. Some of the boys said it had claws for hands, but there was never a consensus on that because the mist was so dense that it was impossible to tell for sure.

Knowing the Flatwoods Monster emerged on the scene within just a few months of one of Braxton County’s greatest tragedies may aid in understanding how this creature became West Virginia folklore. The Korean War had taken four Braxton County boys under the age of 21 earlier in 1952, and considering the population was only 300 people, everyone knew these guys. Fear was building over how close to home war and the “red scare” were. Some speculate that the advent of nuclear weapons, the Cold War, communism, and conspiracy resulted in the typical American being far more fearful and imaginative than they had been in previous generations.

Is this how the Flatwoods Monster emerged in Braxton County? Or is it more likely the creature crash-landed here on Earth in exactly the right place to be discovered by a group of kids and a mom? Some claim the monster was simply an owl that happened to coincide with a meteor. That seems like the same kind of cop-out as alleging Mothman was just a crane, so let’s instead revel in the idea that we can’t possibly know what’s out there.

Blog B: The Flatwoods Monster

Let’s talk about the Flatwoods Monster, a mysterious creature that was said to have been spotted in West Virginia in 1952. It all started on September 12th, when a group of local residents, including a mother and her two sons, reported seeing a bright object crash landing in a nearby field. Being the curious folks they were, they went to investigate and claimed to have come face to face with a creature that was around 10 feet tall, with a dark body, a red face and glowing eyes. According to their accounts, the creature had a wide, round head and a long, pointed tail, and it gave off a pungent, sulfur-like odor.

The creature reportedly stood there for a few seconds before moving towards them. The witnesses, understandably freaked out, ran back to the nearby town of Flatwoods and reported the encounter to the local sheriff. A search party was organized to look for the creature, but it was never found.

News of the sighting quickly spread, and soon the incident was making headlines all over the country. Many theories have been proposed to explain what the group saw, like a meteorite, a hoax, or a type of natural gas, but no concrete evidence has been found to support any of these explanations.

It’s also worth noting that this is not the only case of a supposed monster sighting in West Virginia, there are other similar stories from other locations within the state. Some of them with a considerable amount of witnesses and even physical evidence. So, even though it may be difficult to prove whether the Flatwoods Monster is real or not, it’s definitely a topic that has sparked the interest of many researchers, writers, and even enthusiasts. making it a relevant topic in the realm of the unknown and paranormal.

Despite the lack of solid evidence, the story of the Flatwoods Monster has captured the imagination of many people. Over the years, it’s become a popular subject in books, documentaries, and movies. Even though we may never know the truth behind the 1952 sighting, it’s a mystery that continues to fascinate people.

Now for some musings…

One of these overviews is my own creation, based on personal knowledge of the Flatwoods Monster. The other was created by ChatGPT using the query “Write a conversational blog of about 370 words on the topic of the Flatwoods Monster in West Virginia, when it appeared, and what it looked like.” The result includes that information and more, highlighting the innate ability of ChatGPT to produce writing that goes beyond the dry, technical work of many prior AI writing bots built with only general knowledge, such as Hyperwrite and Jasper, two longer-established AI copywriting concepts.

When I sent the blogs to our copyediting team, I asked that the proofreader not change the ChatGPT blog at all and instead add comments where changes would be needed if it were human-crafted and I wasn’t trying to preserve its original state. The result was lack of hyphenation, incorrect uses of commas, and in a couple of places either spliced or run-on sentences. Overall, not too many mistakes—is that a sign AI mimics our own struggles with comprehending the grammatical maze of English?

To summarize: ChatGPT knows about my secret cryptid friend, the Flatwoods Monster. What else does it know, and how do we keep from personifying it? I seriously asked it, after it created the blog, “What do you think the Flatwoods Monster was?” Want to know what it said? “As a language model, I don’t have personal beliefs or opinions.” Duh, how could I forget?

What do you think? Who wrote which?
We hosted a Poll on LinkedIn and though the vote was close, Blog A was determined to be created by ChatGPT. In reality, our Demand Generation Manager, Tiffany, wrote Blog A and ChatGPT wrote Blog B.

Shifting to a Digital Teaching Model? Here’s Some Advice.