Integrating Ada Lovelace into Your Classroom

Content Warning: Many websites, books, and videos about Ada Lovelace focus quite a bit of attention on the more unsavory aspects of her father’s life, as well as certain events of the later part of her own life, which may not be appropriate for younger children. In addition, there is a lot of incomplete information and misinformation about her and her work. Some sources likely overestimate her contributions to the Analytical Engine, while others may underestimate them. We suggest you prescreen any materials you plan to use in order to make sure they are appropriate for the age of your students.

Who Was Ada Lovelace?

Ada Lovelace, the Enchantress of Numbers, was the daughter of Victorian bad boy Lord Byron and “Princess of Parallelograms” Annabella Milbanke Byron. Her parents split when she was five weeks old, and she never saw her father again. Ada’s mother wanted her to be nothing at all like her father, so Ada was banned from studying poetry or even looking at his portrait. Instead, she was allowed to study math and science. Ada’s mother hired multiple tutors for her studies, including well-known mathematicians such as Augustus De Morgan and Mary Somerville.

Ada did still have her creative side, however. At age 13, she was absolutely fascinated by the flight of birds—or, as she named the topic, “flyology.” She dissected crows, designed a mechanical bird that could flap its wings, and conceptualized “a horse with a steam engine in the inside so contrived as to move an immense pair of wings, fixed on the outside of the horse, in such a manner as to carry it up into the air while a person sits on its back.” Sadly, this steampunk Pegasus was never built.

At age 17, Ada met the famous inventor and curmudgeon Charles Babbage. At one of his famous soirees, she and her mother watched a demonstration of his Difference Engine No. 1, a mechanical calculator operated by means of a crank. This was the beginning of a lifelong friendship and collaboration.

Ada married William King when she was 19. In 1838, King became Earl of Lovelace, which made Ada the Countess of Lovelace. They had three children, but Ada maintained her friendship with Charles Babbage and her interest in his work. She wrote to Babbage, “I think I am more determined than ever in my future plans, and I have quite made up my mind that nothing must be suffered to interfere with them. I intend to make such arrangements in town as will secure me a couple of hours daily (with very few exceptions) for my studies.”

What Were the Engines?

The Difference Engines were basically mechanical calculators, designed to evaluate polynomial functions and generate tables of values. Polynomials were used to approximate functions that were even harder to evaluate, such as logarithmic and exponential functions. The tables were used in navigation, astronomy, and engineering. Tables produced at the time were calculated by hand and frequently contained errors. The first Difference Engine would calculate values mechanically and stamp them into plaster, which could then be used to make an error-free printing plate.

Charles Babbage had a working model built of a part of the Difference Engine No. 1. He gave demonstrations of this model at parties and used it to raise money to fund the construction of the full engine. His complete design would have calculated 16 digits and 6 orders of difference using about 25,000 parts. It would have been eight feet high and weighed four tons. After a disagreement between Babbage and his engineer, construction was stopped in 1832, Babbage lost the rights to his own blueprints, and his government funding was ended.

After designing the Analytical Engine, Babbage returned to the idea of the Difference Engine. In 1849, he completed the design of the Difference Engine No. 2, which could calculate 31 decimal places for up to 7th degree polynomials. Although this was never built in his lifetime, a working model was finally built and tested in 1991, 120 years after his death.

Activity 1: Build Your Own Pascaline

To help students understand how a mechanical computing device works, have them research and build a model of a Pascaline, then use it to add and subtract. Students can work in groups to create and assemble the gears. Here are some resources to get you started:

What Did Ada Lovelace Do? 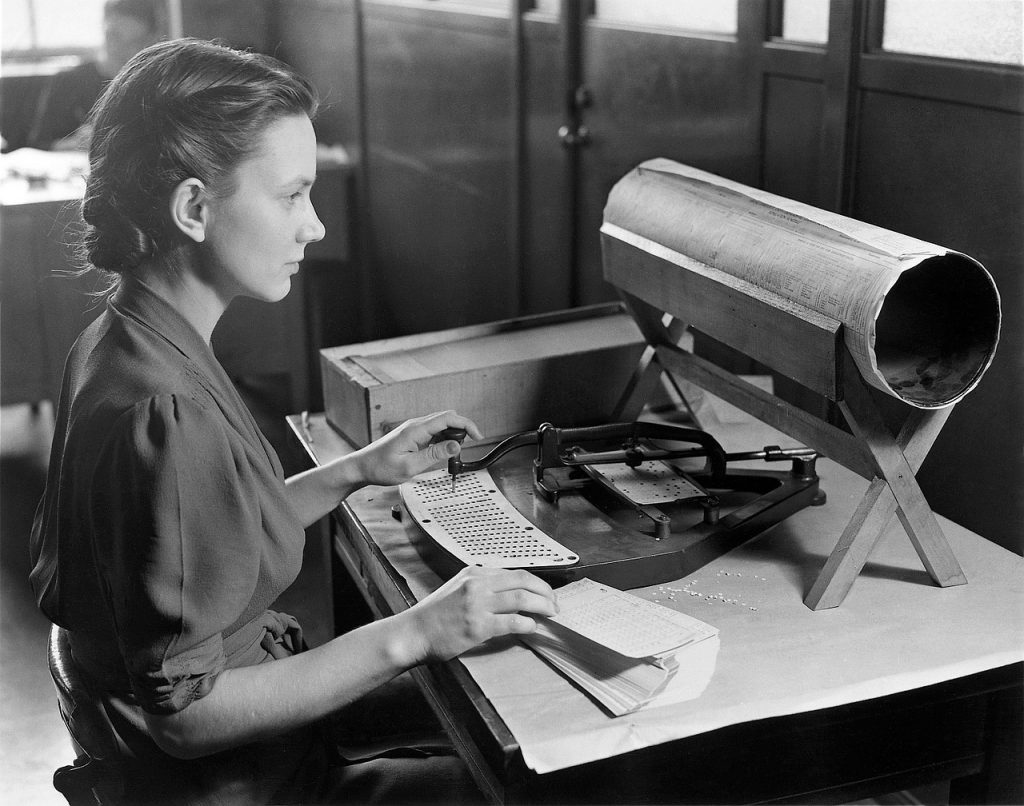 Italian mathematician Luigi Menabrea attended a lecture by Charles Babbage about the Analytical Engine. In 1842, he published a detailed mathematical article about the engine in French. Ada Lovelace translated the article and added her own extensive notes. In these notes, she included an algorithm for calculating Bernoulli numbers, which is considered to be the first computer program. It is unknown exactly how much of the notes were hers alone and how much were produced in collaboration with Babbage, but historians generally agree that she understood the potential of the Analytical Engine in a way that was beyond Babbage’s vision. She described how codes could be created for the device to manipulate letters and symbols. She theorized a method of repeating a series of instructions, which is now called looping, and even suggested that it could be used to compose “elaborate and scientific pieces of music.” Babbage wrote to her, “The more I read your notes the more surprised I am at them and regret not having earlier explored so rich a vein of the noblest metal.”

Ada Lovelace died of cancer at age 36. Because the Analytical Engine was never built, her work did not have the impact it could have had, and her ideas were nearly lost to time. Her work was rediscovered 100 years later by Alan Turing, the World War II codebreaker and father of artificial intelligence. He debated her statements about the Analytical Engine’s abilities and whether machines could ever be capable of thinking. When Ada Lovelace’s notes were republished by B. V. Bowden in his 1953 book Faster Than Thought, she became more widely recognized as a pioneer of early computer programming. In the 1970s, the U.S. government developed a programming language named Ada in her honor, which is still in use today.

For students with a bit of coding experience and higher-level math knowledge, this article from Two-Bit History contains a detailed analysis of Ada Lovelace’s program and a link to a translation of the program into C. Students can read and discuss the article, or they can use the program to generate Bernoulli numbers.

Ada Lovelace Day is celebrated on the second Tuesday of October each year. Here are some ideas and resources for organizing your own event for Ada Lovelace Day:

To learn more, you can download a list of some of the resources Tessa discovered while researching Ada Lovelace.

Tessa Henry is a Supervising Editor for Six Red Marbles. She has been writing and editing math products from preK to calculus for over 20 years, with a particular fondness for geometry. She is also a Girl Scout leader and enjoys hiking, reading, and playing with string (crocheting, knitting, tatting, and macramé).

Skills-Based Learning and the Changing Economy